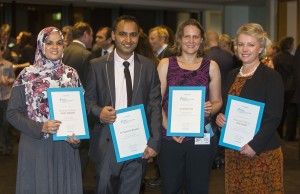 Four NSW researchers whose work has changed the way we design and deliver healthcare have been honoured in the Sax Institute’s inaugural Research Action Awards.

The researchers’ work has impacted on areas as diverse as being pivotal in having commercial sunbeds banned to changing the way health workers communicate about vaccination with hesitant parents.

The Institute established the annual awards to recognise research that supports policy decisions that make a real-world difference to people’s health and wellbeing.

“The winning applications are outstanding examples of research that is making a critical contribution to health and health systems,”said Sax Institute CEO Professor Sally Redman.

“Our award winners have not only undertaken research about issues of immediate relevance to those who make health decisions, they have also found elegant ways to have their findings acted upon.”

The awards were presented at a cocktail reception attended by senior health leaders and members of the public health and health services research community on 15 September. Professor Nicholas Mays, Editor of the Journal of Health Services Research & Policy, was a special guest at the event.

“The Research Action Awards send a signal that there is more to having good research than the traditional research career track,” Professor Mays said. “We know how hard it is to take good research and take that into policy and practice. To seize opportunities to move findings into the real world is very difficult.”

To do so required skills such as tenacity, diplomacy, humility and  communication skills, all of which were all demonstrated by the award  winners, he said.

NSW Chief Scientist Professor Mary O’Kane, who presented the awards, said they would inspire research that focused on finding solutions to real-world problems.

“These are a wonderful set of awards,” she said.

The award winners are:

Dr Cust led the first Australian population-based study to establish a link between sunbed use and melanoma, and showed that young people were particularly sensitive to the effects of sunbed UV radiation. She also produced modelling estimates for the Cancer Institute NSW that showed banning sunbeds would reduce the number of melanoma cases in NSW alone by 120 per year and about 26 per year in the 18−29 year age group.

The research was pivotal to the NSW Government introducing a total ban on commercial sunbeds in late 2014. Bans have now been rolled out in other Australian states and overseas.

“I worked very closely with melanoma patient advocates after this research was published and there was already community awareness around the potential risks of sunbeds so that, in combination with the support of the Cancer Institute, really helped get this work on the agenda,” Dr Cust said.

Associate Professor Leask has been researching the area of vaccine refusal and acceptance for nearly two decades and has found that strategies to improve vaccination rates should target fence-sitting parents rather than those whose opposition to vaccines is entrenched. Her work has led to an international collaboration to develop a Vaccine Communication Framework, which has been used by healthcare workers in vaccine communication in a number of countries.

This is being further developed and evaluated by the Federal Government and National Centre for Research and Surveillance in a three-year project called SARAH – Strategies and Resources to Assist Hesitant parents with vaccination. Associate Professor Leask has provided policy advice to state and federal health ministers and has presented her research to leading international health bodies.

“Spending time advising policy makers and practitioners and talking to the media about your research is a tremendous opportunity. But it means you may spend less time on traditional measures of academic success like peer reviewed publications. This award recognises all that effort and time,” she said.

Associate Professor Magrabi has sought to shed more light on the poorly understood area of patient safety risk posed by e-health systems. From her world-first analysis of IT safety incidents, she developed a new classification system for e-health risks which has become the de facto international standard for analysing IT safety incidents.

She has led major pieces of work looking at IT-related safety risks in the US and England and her work is shaping policy to govern e-health safety, including recommendations from the US Institute of Medicine accepted by the US Government. Associate Professor Magrabi has also developed a new IT incident monitoring system that has been tested in general practices across Australia.

“It is really highly significant to have our research recognised in this way as this is an issue of major significance and urgency. IT systems for pathology, medications, radiology and record-keeping play a mission-critical role in our hospitals and GP surgeries but there is not yet any active surveillance of IT-related harm currently experienced by health systems in Australia or elsewhere.”

Dr Khanal, from the Ministry’s Office of Preventive Health, took an evidence-based approach to the policy question his organisation was facing: how to remove barriers to families attending the State Government obesity treatment program Go4Fun. After a review identified that requiring families to attend the 10-week program twice per week was a participation barrier, Dr Khanal led a randomised controlled trial to determine the impact of restructuring the program.

The research found the revised program could be delivered weekly without compromising health outcomes or attendance, leading to the program frequency being changed, and resulting in substantial cost efficiencies that allowed savings to be diverted to other health programs.

Dr Khanal said the program was now accessible to families, which was a good result.

“The question of what is the minimum attendance at paediatric obesity programs is an under-researched area and once this work is published we expect it is going to stimulate more discussion on the topic.”

The four successful applications, who each received $3000 towards their professional development, were selected by a panel of national and international experts.