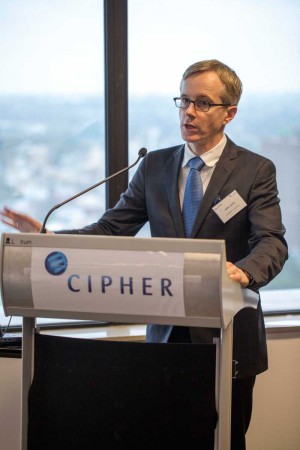 Researchers and universities should be discouraged from promoting the results of single research studies unless they are in the context of a systematic review or (better yet) an evidence brief, according to Professor John Lavis.

Professor Lavis, Director of the McMaster Health Forum at McMaster University in Canada, was addressing a forum held by the Centre for Informing Policy in Health with Evidence from Research (CIPHER) in Sydney last month.

Leading health policy makers and researchers attended the CIPHER forum to discuss how to make research work better for decision makers. CIPHER is an NHMRC Centre of Research Excellence that is testing the best ways to help policy agencies build their capacity to appraise and use research.

Professor Lavis said researchers constantly marketed studies that might only be one of dozens addressing the same question. And even when they marketed systematic reviews, any given review was likely to address only one of the many questions that policy makers need to answer.

This emphasis on single outputs made it difficult for policy makers to make sense of research evidence to inform their decisions, he said. Evidence briefs, which summarise all of the relevant evidence about a problem and its causes, options for addressing it, and key implementation considerations, could address this challenge.

He outlined his top priorities for action to entrench evidence in policy making:

From evidence to action

Dr Rohan Hammett, of the NSW Ministry of Health, also addressed the forum. Dr Hammett, Deputy Director-General, Strategy and Resources, said research evidence could help to address spiraling health care costs, which would consume 80% of the NSW budget by 2050 if the current trajectory of health expenditure was continued.

“We have daily requests for new technology for which there may or may not be an appropriate evidence base and yet the system is demanding it and the public are demanding access to those new treatments,” he said.

One of the key drivers of growth in health system costs was that new and more services were provided to every patient in the health system, some of which were not supported by appropriate scientific, rather than anecdotal, evidence about their benefits to patients, Dr Hammett said.

Sax Institute CEO Professor Sally Redman spoke about CIPHER’s work. As part of its activities, six policy agencies are testing strategies for increasing the use of evidence for research in policy.

Professor Redman said that based on the findings so far,  there was a high level of value placed on research and agencies used research in very different ways.

CEO of the National Health and Medical Research Council (NHMRC), Professor Warwick Anderson, told the forum the NHMRC was testing ways to better match research funding with policy needs, including the new Partnership Centres, which were creating partnerships among researchers and policy makers.

The Sax Institute is the Administering Institution for one of these centres, The Australian Prevention Partnership Centre, which is developing a system to prevent lifestyle-related chronic disease. The centre is led by Professor Andrew Wilson and funded by the NHMRC, Australian National Preventive Health Agency (ANPHA), the NSW Ministry of Health, ACT Health, HCF and the HCF Research Foundation.

Professor Anderson also drew attention to the NHMRC Partnership for Better Health. These projects are designed to help create partnerships among decision makers, policy makers, managers, clinicians and researchers and involve partnership funding with more than 200 policy and practice agencies.