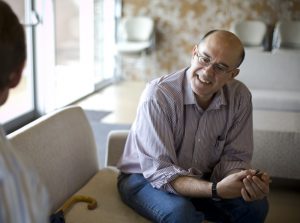 Collaborating with governments not only in Australia, but in at least 20 neighbouring countries, is a key to much of the successful work undertaken by the Menzies School of Health Research, says Director Professor Alan Cass.

The Centre, which recently became a member of the Sax Institute, has its headquarters in Darwin and is dedicated to improving Indigenous, global and tropical health. It works with partners in the Asia-Pacific region, as well as with Aboriginal and Torres Strait Islander communities across northern and central Australia.

Professor Cass says Menzies’ researchers meet regularly with the key players in governments within the region to discuss their priorities.

“We will consult and discuss research ideas with governments – that is very much the way we work,” he says. “We have a very collaborative approach – we feel this is essential for us to do work that is policy-relevant.”

“Many of our research leaders are very well linked in both service delivery and policy. We have the capacity to influence policy in countries to the north of Australia as well as working closely with the Northern Territory Government.”

A recently released report compiled by Deloitte Access Economics showed that the School’s approach is delivering value-for-money research that has a real-world impact.

In 2015, the Menzies’ research returned $2.70 to the economy for every dollar invested across the Northern Territory, Australia and Asia-Pacific, according to the report’s modelling of the costs and benefits of its activities. Its activities generated a total benefit of $1.1 billion across those regions, with a net benefit of $697.9 million, the report shows.

“Menzies is poised to make a core contribution to the development of Northern Australia and to strengthen education, health and economic partnerships with Australia’s neighbours across the region,” the report states.

Professor Cass said one of the areas highlighted in the report is the impact in eliminating malaria in the region, including the roll-out of better malaria treatments resulting in a 47% reduction in malaria-related deaths in Papua, Indonesia.

A collaboration led by the Menzies School of Health was this month awarded a $2 million research grant for further work towards the prevention, control and elimination of malaria and tuberculosis in South East Asia and the Pacific. The grant will focus on research to track drug resistant malaria within countries and across borders, and will progress and assess innovative strategies to address drug resistant TB, including in Papua New Guinea and Indonesia.

Professor Cass said the report is an important tool to engage governments, as it gives evidence of the value of investing in the Menzies and of the broad impact of its work.

That was demonstrated by a $5 million funding boost pledged in this year’s NT Budget, which will see the centre undertake further high value research of relevance to the Territory and Indigenous health in northern Australia, he says.