Self in the system: a new way to be a public health ‘change agent’

Systems thinking is tip-toeing its way into the world of preventive health and health promotion. It’s a mindset that doesn’t reduce a complex system to the sum of its parts; rather it emphasises the connections between the different parts, seeing the system as a creation of their interaction. Systems thinking encourages people working in prevention to find new ways to shift or recombine parts of the system to get better outcomes.

A research paper published recently in Public Health Research & Practice, a peer-reviewed journal of the Sax Institute, looks at an important concept in systems thinking, that of the “self-in-the-system”. The paper, authored by Monica Bensberg, explores the idea that if a health practitioner understands the different parts of the system and their own place in it, they can better identify the relationships they need to foster in order to effect change. This is key for people working in prevention, because usually they have very little authority to instigate change by themselves. They have to achieve this through influence, which is about knowing who to mobilise and how.

The paper looks at Healthy Victoria Together, a major prevention initiative with a systems thinking focus which aimed to reduce obesity and related chronic diseases in the state of Victoria. It examines how practitioners involved in this initiative understood themselves as part of a system and how they used that understanding to act as an instrument of change.

Thirty-one interviews were conducted with practitioners about how they understood systems thinking for prevention in the context of the Healthy Victoria Together initiative. Some spoke about a new way of working from inside the prevention system, consciously seeking opportunities to use their influence to instigate lasting solutions. Several important “self-in-the-system” themes emerged from the conversations:

Although systems thinking has been gaining traction in preventive health, relatively little research has been done to date, and what has been done has been mostly methods-based: social-network analysis, for example. In contrast, this paper focuses on just one skill – the ability to deploy “self-in-the-system” tactics – with real relevance to people trying to solve the so-called “wicked problems” in public health.

The take-home message that emerges from this research is that if people better understand their own place within a complex system, they will make better decisions about where and how to intervene to bring about improvements in health. 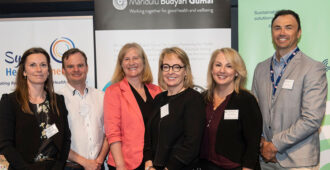