Researchers from Cancer Council NSW have used the Sax Institute’s 45 and Up Study to test a new tool that can predict which people are at the highest risk of developing lung cancer. Here, Dr Marianne Weber, Research Fellow at Cancer Council, explains the research. 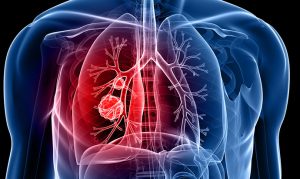 We know that smoking is the primary factor that puts people at risk for lung cancer: 80 per cent of lung cancers are in people who were smokers. We also know that early diagnosis of lung cancer is difficult, as the symptoms can often be vague and non-specific, and so the majority of cases are diagnosed at a late stage. Lung cancer screening therefore sounds like a great idea on the surface: what if we could just screen all current and ex-smokers with a CT scan to see whether they have lung cancer or not?

Unfortunately, it’s not as simple as that.

Screening everyone who has ever smoked a cigarette brings with it many potential harms, including unnecessary invasive follow-up testing because of false-positive screens and over-diagnosis, as well as adverse psychological effects. In a big US lung cancer screening trial, the false positive rate was 95% – meaning that 95% of people had a suspicious finding on their CT scan that didn’t turn out to be lung cancer.

To further illustrate the potential harms of screening, consider this stat from that same US trial: 1 in 2500 deaths was due to the radiation from the CT scans themselves – not because of the patient’s lung cancer.

Identifying the most at-risk smokers

The good news is that there is an exciting field of research currently evaluating how we could best identify the people who could potentially be screened for lung cancer, i.e. the smokers at the highest risk.

For example, a new study by Cancer Council NSW has recently evaluated the performance of a lung cancer risk prediction tool. The tool, which was developed in the US and Canada, uses a mathematical formula to combine factors such as age, smoking intensity, duration and years quit, as well as additional factors such as body mass index and family history of lung cancer to predict someone’s risk of being diagnosed with lung cancer in the next 6 years.

Our study compared the tool’s predictions with real-life lung cancer outcomes of almost 100,000 smokers who are part of the Sax Institute’s 45 and Up Study – and found that it had excellent predictive performance here in Australia. The tool correctly predicted nearly 70 per cent of all subsequent diagnoses in study participants.

What this means for lung cancer screening in Australia

Our study has major implications for the future of lung cancer screening in Australia – it’s the biggest cohort ever analysed with this tool, and the tool’s performance is extremely promising – meaning fewer individuals would need to be screened and more lung cancers would be detected. In the future, the tool could help identify smokers suitable for lung cancer screening, and thus maximise the effectiveness of screening.

However, there is also a pressing need for more data and evidence. There is a joint Australian and Canadian trial underway that will further validate the tool and optimise the trade-off between screening benefits and harms.

It is important to note that in the absence of further evidence in Australia there are currently no plans for a lung cancer screening program. The best way to reduce your risk of lung cancer is – and always will be – to quit smoking and stay quit. If you’re a smoker, call 13 QUIT or visit icanquit.com.au for advice and support on quitting. Furthermore, if you are worried about your personal risk of lung cancer, you should talk to your doctor about early signs and symptoms.