Dr Melody Ding, Senior Research Fellow at School of Public Health at the University of Sydney, discusses the findings from her research using the 45 and Up Study.

Australia is a nation characterised by ethnic and cultural diversity. According to the latest census data, 28% of the Australian population was born overseas. Many of the so-called “New Australians” and their families belong to culturally and linguistically diverse communities. In most Western countries, people from culturally and linguistically diverse backgrounds frequently experience poorer health due to barriers such as linguistic and cultural obstacles, poor health literacy, and problems with healthcare access and utilisation, leading to inequalities in health outcomes.

Chinese Australians are the largest non-English speaking ethnic group in the country. Currently, 2% of the Australian population were born in China and 4% report Chinese ancestry. The recent and rapid growth in Chinese immigration has led to gaps in research about immigrants’ health, as well as gaps in practice and services to address the specific needs of culturally and linguistically diverse communities. Heart disease is the biggest killer in Australia and investigating cardiovascular disease and risk factors in Chinese Australians is an important health issue that need to be addressed.

Working together with colleagues from the School of Public Health and the School of Nursing at the University of Sydney, I undertook the first comprehensive examination of cardiovascular disease risk factors in Chinese, mixed Chinese and non-Chinese Australians. We did this by studying more than a quarter million men and women in NSW aged over 45, who are part of the Sax Institute’s 45 and Up Study, the largest ongoing study of healthy ageing in Australia. The results, which give the first picture of CVD risk factors for Australians of Chinese background, were published in the International Journal of Cardiology.

Our research identified a distinctive pattern of cardiovascular disease risk factors among Chinese Australians as compared with their non-Chinese counterparts.

Now that we have a better understanding of the unique risk profile of Chinese Australians, it opens the door for decision makers in the health sector and organisations like the Heart Foundation to develop targeted, culturally specific programs to educate the community about cardiovascular disease and the key risk factors.

This article was first published by the Heart Foundation. Gender makes a difference in preventive treatment after heart attack 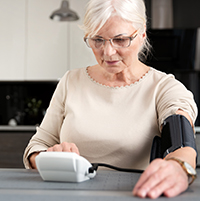