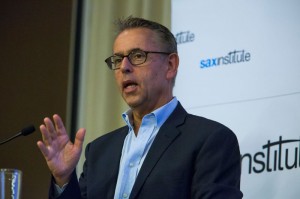 It’s all about the human story.

This key piece of advice, from leading medical journalist and presenter Dr Norman Swan, was delivered to the public health research community recently at a Sax Institute event on public health communication.

Getting your message heard: A louder voice for public health was designed to help our members and associates address the challenges of achieving an effective public health voice in today’s media landscape.

Dr Swan, producer and presenter of ABC Radio National’s The Health Report, joined the University of Sydney’s Professor Simon Chapman and Sydney Morning Herald Health Editor Amy Corderoy in a presentation and panel discussion about how researchers can better engage with traditional and new media to get their messages heard.

The power of one

Dr Swan urged the audience not to underestimate the power of the case study to tell the bigger story, and while researchers might be tempted to stick to the numbers, understanding the media’s need to focus on the human story would enable them to work more effectively with journalists in disseminating their research.

He also advised the audience to think about who it was they were selling their story to – and most people weren’t aware that convincing a journalist their story was worthwhile was only the first hurdle. News editors and producers were powerful and important stakeholders at the heart of the news decision making process who also needed persuading about a story’s merits, he said.

Professor Chapman described his experience in dealing with traditional and new media around public health research and debate. He said social media platforms such as Twitter were a highly effective way of taking published research directly to an interested audience broader than those who read the scientific literature. It could also drive awareness of published papers and affect open and download rates of online journals.

“Although it does require a resource commitment, the comparative cost of social marketing campaigns is low, providing an opportunity for researchers to experiment with communication techniques and messages and a potential starting point for developing campaigns,” he said.

And as for the ugly reality of Internet trolls, Professor Chapman advised the audience to follow standard procedure: ignore them, don’t respond, block or mute them, report them or contact police if the abuse is of increasing concern.

Speaking from a print media perspective, Ms Corderoy told researchers that the world had moved on for print journalists and they were now “platform neutral”, writing for both print and web and working with other mediums such as video to tell their story.

She said it was important to be flexible and understand the many competing priorities journalists and their editors were facing. It was also important to think about what a story might look like, and understand that just because your idea might be important, it is not necessarily newsworthy. Another key tip was to avoid speaking “reseracher-ese” – because if you couldn’t translate your work, the media outlet would do it for you.